At one point or other, Daniel Grotta wore nearly every hat in publishing: author, journalist, music and book critic, publisher, editor, and mentor. A full-time freelancer throughout his career, he enjoyed the personal creative control and freedom that allowed him to make a rather good living writing about what fascinated him, working with and editing the people he most admired, and devoting whatever energy and time was required to produce a great story.

Among Daniel’s many accolades and awards is one that stands apart from the rest: His writings were, at one point, the most requested to be recorded as audio files by clients of Reading for the Blind in Philadelphia, because of the visual clarity and beauty of his prose. And, yet, I believe the greatest tribute to him are the many people he mentored, quietly and privately — people who went on to not just achieve much, but who learned from Daniel to always question and seek and be open to new ideas. They are the legacy that would give him the greatest pride and joy.

I hope you enjoy reading about Daniel on this site, that it proves to be a useful resource for you, and that it will encourage you to read more of his books and articles.

Please click on the section titles below to read highlights of Daniel’s career and accomplishments. For more details (and some great anecdotes), please go to the Life & Career page.

During Daniel's varied and interesting career, he produced thousands of articles and numerous books as a war correspondent, photojournalist, investigative journalist, book and music critic, features writer, columnist, and technology reviewer and analyst. His work appeared in scores of magazines, newspapers and journals.

A member of the National Book Critics Circle, The Authors Guild, Science Fiction and Fantasy Writers of America, the Overseas Press Club, and the American Society of Journalist and Authors, Daniel was a frequent speaker at conferences and other events on writing, literary criticism and the publishing industry.

Daniel's books were as varied as his reporting and his multifaceted mind. 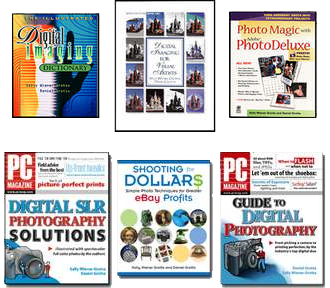 In addition to his renowned biography of J.R.R. Tolkien, Daniel wrote seven other non-fiction books (co-authored with his wife Sally Wiener Grotta, including Digital Imaging for Visual Artists (McGraw-Hill), the first major book about the (then) new field of imaging and digital photography. Other non-fiction books include The Green Travel Sourcebook, The Illustrated Digital Imaging Dictionary, PC Magazine's Guide to Digital Photography and others.

Daniel's fiction includes Seven from Haven (a short story collection), the novella Honor, and Adam V (a novel he completed just before his death), plus short stories.

Daniel's J.R.R. Tolkien: Architect of Middle Earth was the first biography of the creator of The Lord of the Rings and The Hobbit. It was in print continuously for 30 years, was translated into numerous languages around the world, and once had the dubious honor of being the most stolen library book. (As a result, a special library edition was published.)

In a reversal of the usual publishing timeline, it was originally published as a mass paperback, then as a trade paperback, and finally as a hardbound book. This was taken by the publishing industry as an indication of a book that was underestimated by the initial publisher, and which rose on its own to a higher market level.

For well over a decade, Daniel Grotta and Sally Wiener Grotta were PC Magazine's resident experts on digital photography, imaging, scanning, color management and anything else related to pictures in computers. At PC Magazine Labs, they created the test scripts for digital photography, cross-platform testing, imaging software, scanners and digital image quality, as well as defined many of the magazine's other protocols and procedures for testing and analyzing various imaging products and processes.

At DigitalBenchmarks, the Grottas expanded and extended the test processes and protocols that they established at PC Magazine Labs, to provide greater in-depth competitive analyses, R&D testing, market analyses and other services. Their clients ranged from manufacturers to investment companies to corporate users of digital technology.

Sally Wiener Grotta continues to lead the team at DigitalBenchmarks.